The concept for this series is based on the artists past, present, and future. “Dangerous” is inviting you to take  look at yourself and ask if you like the monster you've become?

If you want to know more about the series please scroll down. 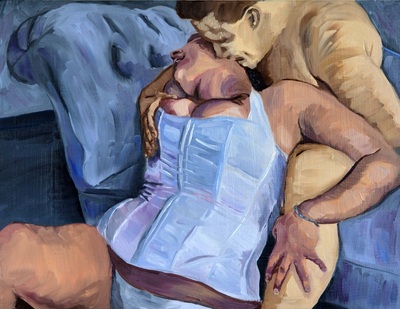 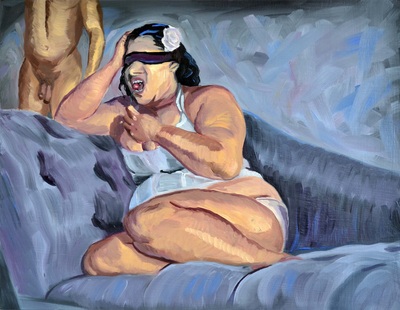 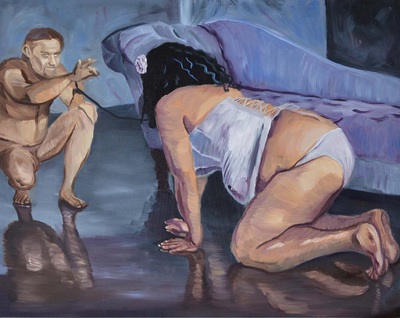 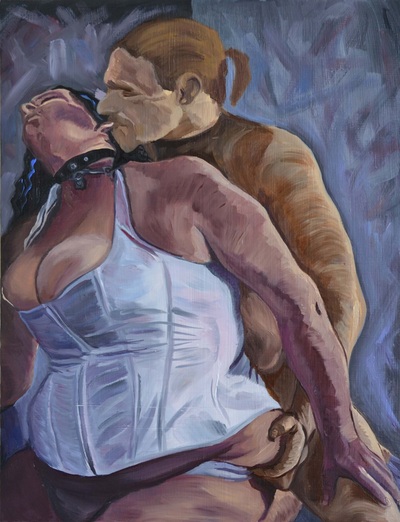 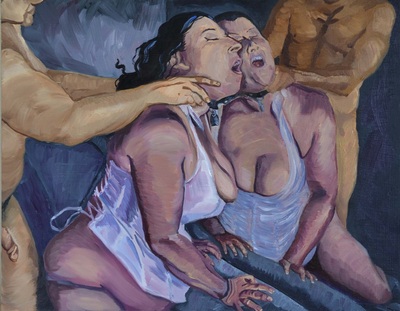 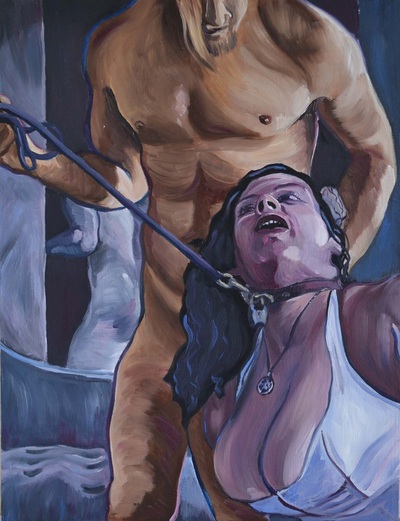 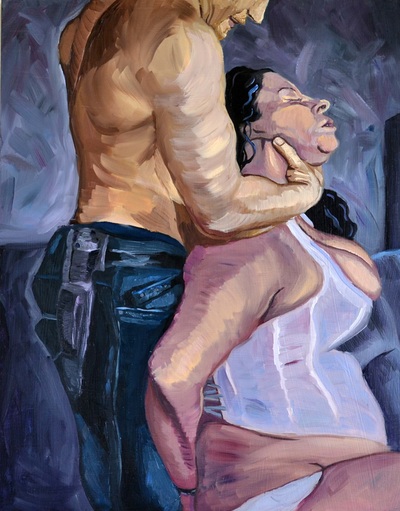 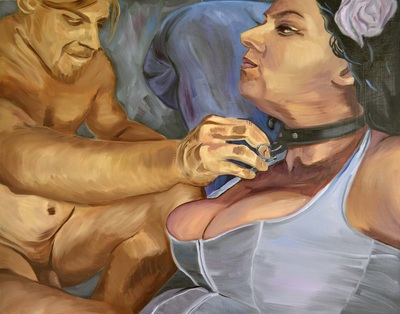 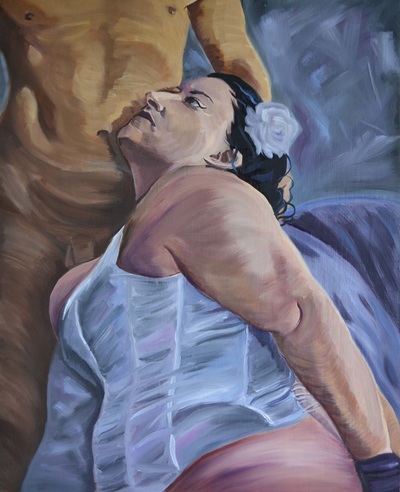 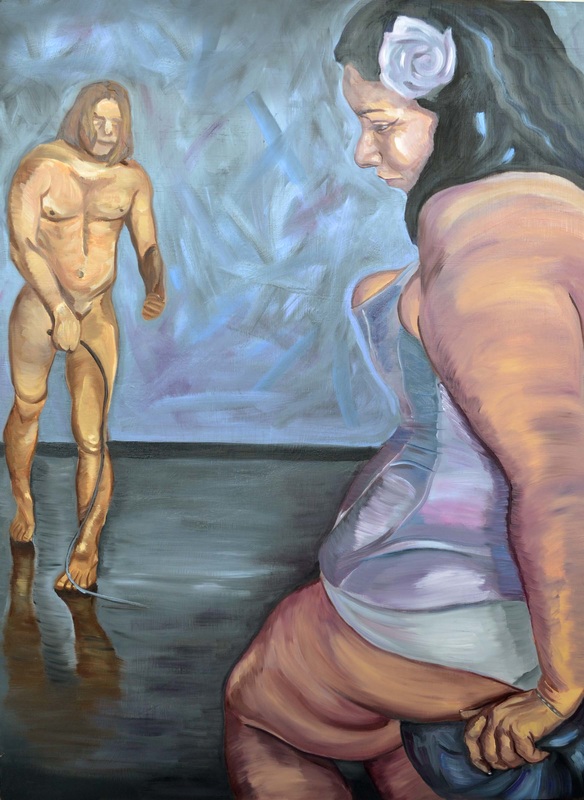 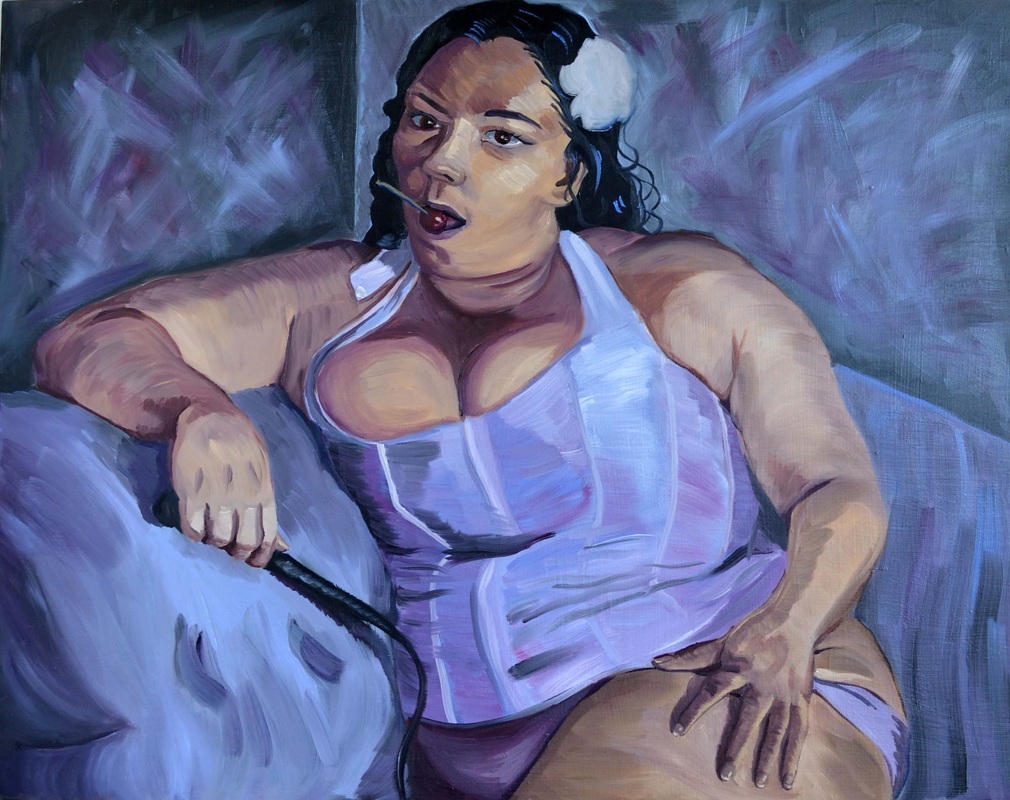 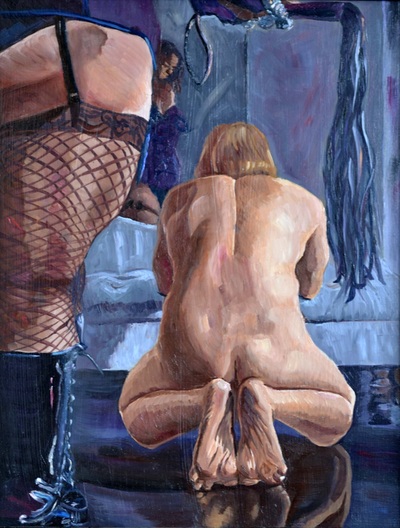 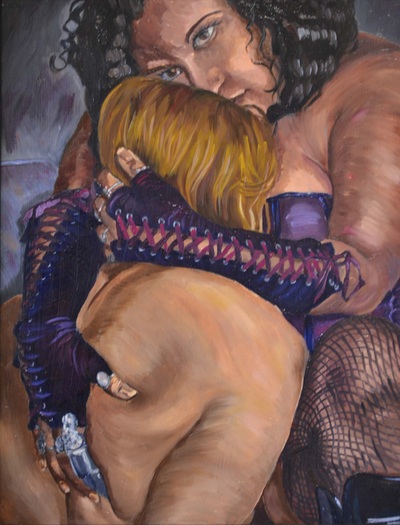 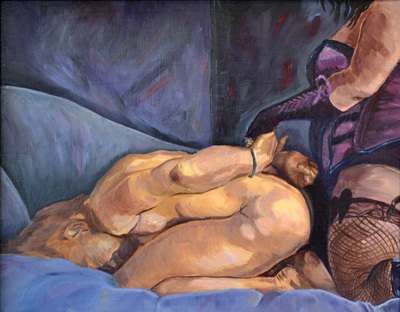 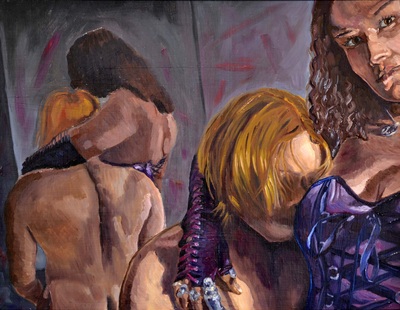 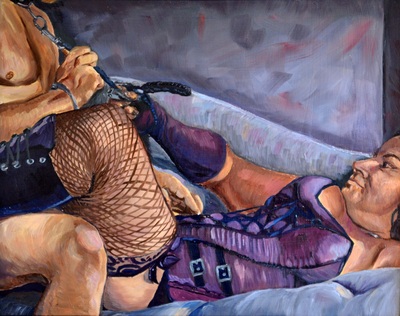 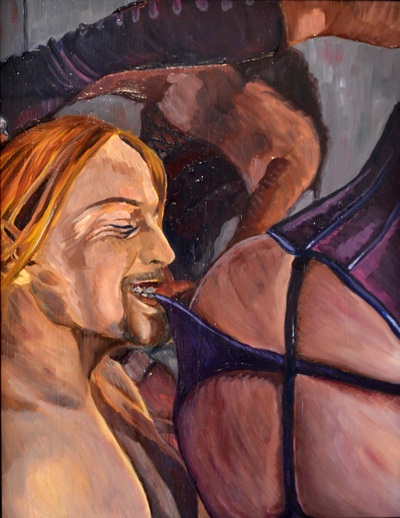 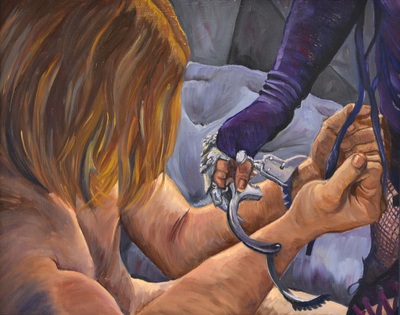 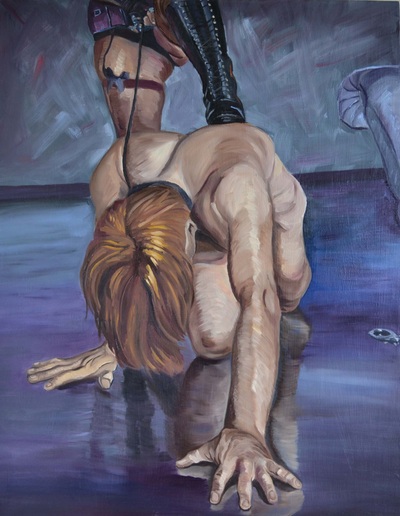 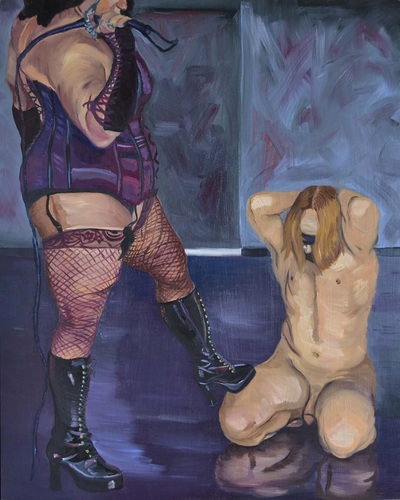 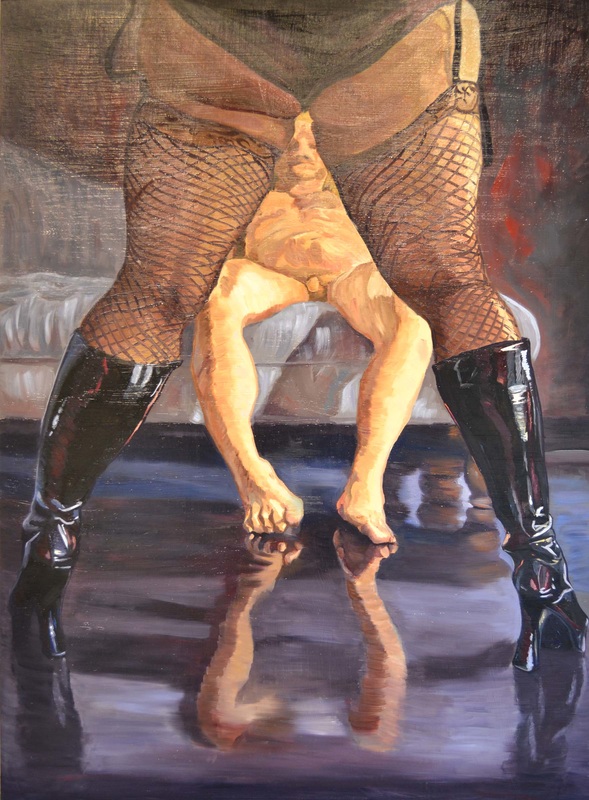 Dangerous 36 x 48 $450
In November of 2013 I wrote a paper on art therapy called “Creative Arts for Healing.”  One of the quotes about art therapy that stuck with me is the mission statement of the The American Art Therapy Association, Inc  “dedicated to the belief that making art is healing and life enhancing.” (“American Art,” 2008) The concept for the series is based on my past, present, and future. The attitude that women are made for using and abusing would be the basis for almost every relationship I have had. After letting guys treat me horribly, I finally starting to stand up for myself.

The series together I call “Dangerous” and have split it into two halves. The first half is called “Surrender/Corrupt” and depicts my past. The second half “Dominator” and the work reflects the present, taking control of the situation and the things that happen to me. More importantly, it empowers me and begins to provide a perspective on what will happen in my future. I've learned that although a painting of a bowl of fruit or a puppy might be pretty, it does not saying anything. It does not move your soul unless the puppy is late personal pet. This series is meant to make you uncomfortable, to think about subjects you may not care to and also to create a dialog about issues others chose to ignore.

I've had mixed reviews on this series but after reading through the guest book left in the gallery I have had my worries banished with words. One viewer wrote “ I hope to be as brave as you one day...” another said “Amazing. The story behind it is so awful, but you managed to take something so ugly and create beautiful art.” Some even shared a little bit of their own stories with me “I absolutely know what you went through as I myself had when I was 8 your work is very moving.” “ Thank you for sharing. I'm sorry to hear about that, but I'm glad that you've changed and had the strength to overcome it all. ROCK ON.” These and other comments left by those who attended my show in the Emmett Christian Gallery within SUNY Fredonia's campus reinforced my my feeling that I did the right thing by exploring this dark theme.

Out of all of the paintings in this collection, which one resonates most strongly with you?

Tell me about that!  When you say you're reclaiming power, you put it in a very personal tone.  Who are you taking it back from?

CIP:  Well Jesse, I was a victim of molestation when I was young, and was raped by a boy on New Years Eve, some years ago.  After that I kind of just let men treat me like crap.  It's the reason I assume I became interested in bondage in the first place.  I was used to being stepped on and taken advantage of.

Did you paint this project as part of your schoolwork?

CIP:  Yes, as a matter of fact Jesse I did. I completed 24 paintings in one semester for the double painting class I was in.  The paintings varied in size from 14 x 18 inches to 3 x 4 feet.  All on panels made by hand.

That's incredible.  How did your professor and class-mates approach your work?  Was there any tension?

CIP:  My professor was surprisingly supportive.  My classmates were mostly neutral, but there were some who were uber excited about it.

And you didn't experience any hostile feedback?

CIP:  To an extent.  I invited the Dean of the Visual Arts and New Media department to the opening.  He liked the work, but said we should have put an advisory outside of the gallery.  Never did and was never reprimanded, but I believe it was more of a suggestion.  I got mostly positive feedback in my guest-book!  But, one coward questioned my artwork in another artist's book.

CIP:  I don't want to speak for everyone.  I have noticed in conversations with some of the friends I have gained in the fetish world, some carried fetishes over from childhood urges. One of my friends has a medical glove fetish; I know with him it started early, and as he grew to the age of puberty his thing for medical gloves became sexual.  I think it's probably similar with most of us. We are trying to get back a feeling we are used to, to or create a new feeling to replace an old one.


Alrighty! Well, I hope you continue to have fun with the bondage world, and that it continues to give you both creative inspiration and intimate satisfaction. Thank you so much for your time!


Cecelia Ivy Price is the owner of Artistic Chaos Studios, and can be reached through her e-mail address, where she is available for commissions.  In addition, she's opened a GoFundMe project for a trip to Italy to further her art studies.  If you like her work, lend her your support!  Her VF username is CeceliaIvyMarie.

Jesse Pohlman performed this interview on behalf of Vampirefreaks.com.  He's a novelist working out of Long Island, New York, with many titles available on his Amazon Author's Page.  His VF username is Epsilon227, where you can contact him about writing for you!  Or, just check out his webpage!